Review: The Bigfoot Phenomenon in Pennsylvania 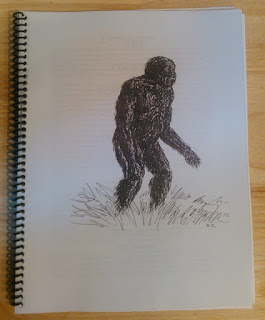 It took me a year or more to track down this book. I set ebay searches and frequently hit up the usual used book sources on the internet, all of which turned up nothing. Eventually, I got it directly from Dr. Johnson. Dr. Johnson was heavily involved in researching both UFOs and bigfoot from the 1970s-1990s. He reportedly stopped taking reports as the internet gained popularity, but I am told he is still involved in research.

Living in Pennsylvania, I was most interested to read this volume. The book mostly discusses cases from the western part of the state - Chestnut Ridge and etc, but a chronological listing of reports does branch out a bit. In fact, it includes one sighting from York County (from Seven Valleys near what is now Raab park but what was, at the time, a closed landfill).

While there is some crossover in the sightings covered in The Bigfoot Phenomenon in Pennsylvania and Stan Gordon's books, the cases here are reported with more depth as well as with more photographs, maps, and illustrations. Dr. Johnson provides us with not only the data relative to the sightings (time of day, month, year, county, etc etc) but an analysis of the data.

Most interesting to me is Dr. Johnson's refusal to omit or dismiss uncomfortable details from reports. That is to say, strange lights seen in conjunction or around the same area as bigfoot sightings, reports of bigfoot glowing, "disappearing" etc etc. In fact, the author addresses this head on with the chapter titled "A Quantum Bigfoot?" - offering POSSIBLE explanations for the strangeness associated with bigfoot that isn't magic powers, and explained in such a way as the reader will not need a degree in quantum physics to grasp the concepts.

This volume isn't perfect bound - it doesn't look like something you'd pick up off the shelves of your local giant bookseller - it's spiral bound and probably printed in small batches - but it remains one of my favorite texts on the subject of bigfoot. If it takes you as long as it did me to get a copy, rest easy - it's worth the wait.