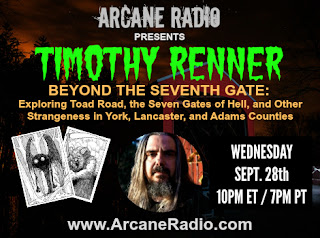 Upcoming appearances for Beyond the Seventh Gate 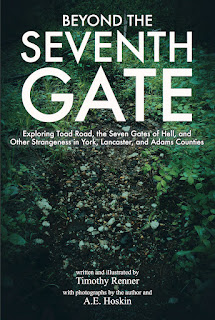 Upcoming appearances related to Beyond the Seventh Gate:

Wednesday September 23, 2016 (Actually Thursday morning September 24): I will be on Coast to Coast AM from 3:00 am - 5:00 am Eastern Time discussing the book and strangeness in South Central Pennsylvania.


Saturday September 24, 2016: I will be at East Coast Para Con in Scranton, PA selling and signing copies of Beyond the Seventh Gate.


Wednesday September 28, 2016: I will be on Arcane Radio discussing Beyond the Seventh Gate.


Saturday October 8, 2016: I will be at the Albatwitch Festival in Columbia, PA.

• In the morning I will be playing music with my folk band, Stone Breath. We have a new album out soon called CRYPTIDS which is all about strange creatures, ghosts, and legends. Much of this album ties in with Beyond the Seventh Gate.

• In the afternoon I will be giving a talk and presentation about strangeness in South Central Pennsylvania and Beyond the Seventh Gate.

• All day - I will be selling and signing copies of my book, Stone Breath albums, Albatwitch shirts, art prints and more.


No date set: I will be appearing a second time on Sasquatch Chronicles podcast discussing the albatwitch and other "little people" with host, Wes, and frequent guest, Duke. This show should appear sometime soon.

I will be appearing on Paranormal Science radio discussing Beyond the Seventh Gate.
Posted by Timothy at 11:15 PM No comments: 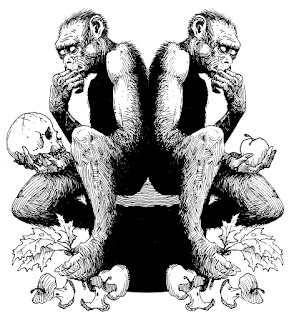 Albatwitch illustration by the author. All rights reserved.

During my recent appearance on Sasquatch Chronicles podcast I mentioned my research on the albatwitch creatures of South Central Pennsylvania. I guess this must have struck a chord because I have been contacted by other researchers, a TV show and several individuals wanting to discuss the creatures ... while I see Wes (Sasquatch Chronicles) is planning an upcoming show on the “little people” - which is what the albatwitch seem to be known as further abroad.

So, what are the albatwitch? A quick search of the web will turn up some slight information: 3-5 foot tall, hairy ape-men who seem to be fond of apples and live around the Susquehanna River (most notably the Chickies Rock area - though albatwitches have been reported on the York County side of the river as well). Whatever these creatures are, they are not simply juvenile bigfoot - for they are never seen in conjunction with adult bigfoot. Albatwitch proportions are different as well - they are reported as thinner creatures, with arms and legs proportionately like humans; and with round heads that sit atop their shoulders (bigfoot are often reported as having “no neck” or a head that protrudes from the shoulders as opposed to sitting atop their shoulders like humans).

You will also read that “albatwitch” is some kind of Pennsylvania Dutch-ified English compound word for “apple-snitch” or apple-stealer. One must make some tremendous verbal leaps to get from “apple-snitch” all the way to albatwitch! That is, if you are thinking of “albatwitch” as an English word. Of course, the Pennsylvania Dutch are not Dutch in origin, but German - and German is still spoken by many people in the area. So, with help again from my German friend Moritz Maier, let’s look at some other possibilities… taking a passage from my book, Beyond the Seventh Gate:

The name, albatwitch, is commonly reported to be a Pennsylvania Dutchified compound word derived ultimately from English ‘applesnitch’, i.e. ‘apple-stealer’. However, alb is a German word for an ‘elf’ or spirit. Given the nature of the creatures, it seems at least as likely that albatwitch might be a mixed compound word, combining German ‘alb’ + English ‘witch’, i.e. ‘elf-witch’ or ‘spirit-witch’. Another possibility is that the word is derived from a combination of German ‘alb’ with Pennsylvania Dutch snitz - ‘snitz’ being a Pennsylvania Dutch term for apples. This would give the word the sense of ‘apple-elf’ or ‘apple-spirit’.

Since publishing, Moritz has turned up some more information for me: there is an obscure German verb witschen which describes an agile, quick, gliding type movement. (Interesting to note how bigfoot locomotion is often described as “gliding” - people describe them moving somewhat like cross-country skiers.) Probably related to witschen is the more common German verb entwishen - “to escape”. Alb-witschen or Alb-entwishen would give us a agile, quick or escaping elf/spirit. Keeping the entire word German, ALBWITSCHEN or ALBENTWISHEN  seem far more likely a root for “albatwitch” than either my “alb-snitz” and “alb-witch” guesses above OR the commonly reported “apple-snitch” you will find elsewhere.

Back to Beyond the Seventh Gate:

The Susquehannock Indians knew well of the albatwitch, and painted images of the creatures on their war shields. The Algonquin also told of small hairy hominid creatures known as Megumoowesoos. Like the Celtic fairies, Megumoowesoos were said to lure people into the woods with wonderful music. Bewitched by the sound of the creatures’ flutes, many who heard and followed the flute songs disappeared. Here again we have the recurring idea of a creature (or other phenomenon) either luring people into the woods, or else taking people already in the woods, with the people in either case never being seen again.

The albatwitches were said to live mostly in the trees. Preferring to keep to the shadows, they made their presence known by a sound like a cracking whip (perhaps this is aggressive branch-breaking, a well known bigfoot trait?). Picnickers at Chickies Rock have reported their apples stolen and sometimes even thrown back at them.

On a recent episode of Sasquatch Chronicles, Wes Germer reports that these creatures are called “little people” by modern Native Americans and have been reported all over the country. They are very quick, mischievous, and aggressive if cornered. This reported aggressive nature of the creatures makes one wonder if some of the encounters with so-called Devil Monkeys are not, in actuality, albatwitch encounters. While we are speculating: perhaps another look at the Jacobs Photos is due - this time with the albatwitch in mind. Bigfoot creatures don’t tend to get caught on trail cams - they seem to understand in some way what they are and how to avoid them. Perhaps albatwitch, though much rarer, are easier to catch on film?

Local legend states that the albatwitch were “hunted to extinction” in the 1800s… however, with area sightings as recent as 2008 it seems the reports of the albatwitches’ demise have been greatly exaggerated.

My albatwitch illustration above is available as a t-shirt ... contact me directly to order, or see the Lost Grave Etsy Store. 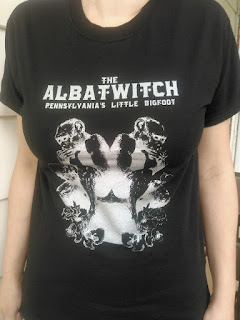 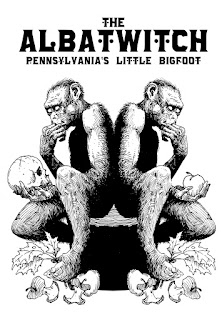 If you have seen something like an albatwitch, bigfoot, or anything else strange or unusual in the area, please contact SEEKERS and report your sighting.
Posted by Timothy at 7:14 PM No comments: