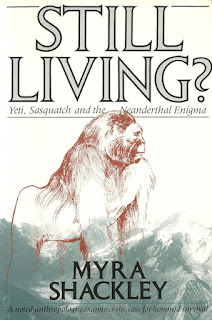 Still Living? takes the practical approach that bigfoot, yeti, and other hairy, man-like creatures seen the world over may in fact be relict hominids. While some of the information may be outdated (much has been discovered about neanderthal man since 1983, for instance), Still Living? remains a compelling read.

Most interesting are the physical distinctions Shackley makes between the North American bigfoot, the Asian yeti, and the almas. Many books simply state bigfoot (et al.) is seen all over the world - and known as yeti, almas, etc in other countries - without noting the difference in footprints, height, and general appearance. I suspect the root of this is that many people who take the study of mystery hominids seriously would rather NOT note the differences. It's hard enough to try to convince people that ONE mystery ape exists. When you start adding in that there may be several TYPES across the world - not to mention several types in North America - the eyebrows of disbelief will no doubt get raised even higher.

However, there are considerable differences, as Shackley notes. Most of the almas reports indicate it is a roughly man-sized creature as opposed to the bigger yeti and the massive bigfoot types. Some of the almas reports have the creatures wearing skins, using tools, trading with humans, even using primitive bow and arrow.

Still Living? is full of such reports - much of the book concentrates on Asia and Eurasia - from Tibet and Mongolia through the Caucasus region - so it's not just another re-telling of the Albert Ostman story (as compelling as it is) with other reports you've heard before ... there are many remarkable encounters related throughout the text that I've never read elsewhere.

Those who ascribe to the 'bigfoot-is-an-ape-in-the-woods' theory will find a lot to love in this text. There is no discussion of the strange lights and other seemingly paranormal elements that accompany many bigfoot sightings. In a novice-friendly, but not simplistic way, Shackley presents history and science supporting the idea that these creatures may in fact be relict hominids. A revised and updated edition, accounting for new neanderthal information and almas reports after 1983, would be very valuable - but this edition is still worth seeking out, and readily available as a used book.