An Early July Walk in the Woods

It was a hot Saturday, but my son was up for a hike. These days I'm almost always up for a hike - so off we went to our current stomping grounds: a park in York County that is rarely occupied by other humans - at least the sections we've been hiking.

We were sweating before we left the parking lot, but I brought plenty of water. The views here are always worth it. From the trail head we can hear a local dog barking, but as we make our way up the hill it fades, or the dog gives up, figuring we're no threat to his owners. Either way, the sounds of the woods take over. The rapid fire knocking of woodpeckers echoes through the trees. As we ascend higher the same crows that always greet us sound their caws.

We stop, so soon, for our first water break - maybe 20 minutes into the hike. "It's not the heat, it's the humidity," the saying goes. I rather think it's BOTH. Stay hydrated folks. I ask my son, "do you want to go downhill to the creek, the way we went last time - or do you want to follow this other path uphill?" I know the answer before he says it. I've observed him hiking of late and he's a lot like me - he always wants to take a different trail. He always wants to know what's over the next hill or around the next bend. Uphill we went. That's my boy.

It's not a steep grade, but we stop again for water before we reach the top. The gnats and mosquitoes are awful. I put a head net over my hat - I don't mind swatting them away from my arms, but I just can't abide gnats in my ears. Still we hear the woodpeckers and a pretty songbird I can't identify. My son points out a rather large fungal bloom along the path: 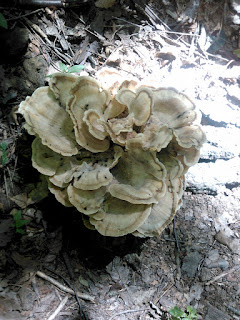 The trail splits again - my son chooses the obviously less traveled and narrower path (and I smile proudly to myself). Eventually it meets back up with the main trail as the blazes show we are back on course. We round another bend and I think I hear something, so I freeze.

What I hear though, is nothing. No birds. No insects. I started looking around - something didn't feel right. Then things started falling from the trees - or so I thought. "What IS that?" I asked my son. "I don't know," came his reply. I'm looking for what could be dropping from the trees when I see a small stone hit the dirt in front of me. I'm trying to make sense of this - I've heard the stories about what throws stones in the woods. I'm looking around. What sounds like a handful of pebbles hits the ground to the right of me. Ok, this is getting weird.

Then I hear motors. Is that a helicopter or something overhead? I'm trying to make sense of all of it all and failing. The motor sounds get closer. Perhaps it's a park ranger coming through if there are some wider trails up ahead? Then I hear "What's THAT?!??" and I spin around and see the headlight of a four wheeler. "THAT" was me, and the question came from the rider. He was moving fast. I wave my arms to let them know my son and I are on the trail. Turning around, I grab my son and pull him off to the side.

One. Two. Three four wheelers followed by a dirt bike. Not park rangers. It's a free country and all, but motorized vehicles aren't supposed to be in this park. I really shouldn't have to worry about my son's safety from four wheelers on these hiking trails. The mood was ruined. My son was a bit shaken and says "Do you want to go back?" He was done - not because he was too tired to go on or was worried about anything in the woods, but because a group of humans who think they are above the rules set out for everyone barreled through the trail without concern for anyone or anything but themselves.

I pause for a moment and let them get a way further on the trail. More water. I'm waiting for the stones to start hitting again - but nothing. Only the sound of engines fading.

On the way back we saw the fungus crushed by tires.

I don't know WHAT was throwing the stones. For all I know it could have come from the fellows on the dirt bikes (though I don't know how). I know it stopped when the engines came close and I know it didn't continue after they passed. Stone throwing is very consistent with reported bigfoot behavior, but without SEEING something, who can say what it was? Other than weird. It was certainly weird.
Posted by Timothy at 7:53 PM