I spent part of sunday at the Hilsmeier farm in Delta, near Muddy Creek. This might not mean a lot to you, but in terms of bigfoot in York County, it is quite significant. 1978 was a huge year for strangeness in York County and saw a wild amount of bigfoot and UFO sightings in the area - and most of these incidents occurred around Delta, Fawn Grove, Gatchelville, etc.

One night in late January, 1978, the Hilsmeier family dogs were unusually aggravated. Barking, howling, running from the fields to the house and back. The following day, the Hilsmeier's found a series of tracks across their property and beyond. More than two miles of tracks - hundreds, if not thousands of prints - each one about 18 inches long and in a straight line, not offset like human tracks... and displaying that ever so strange feature of so many Pennsylvania bigfoot tracks: three toes. Among the tracks were also found the remains of a rabbit and, on a barbed wire fence, some strands of hair.

The Hilsmeier's still have the hair - and still remember the events well. They were gracious hosts and happily talked to me about that day in 1978. For me, having read the newspaper articles and some other descriptions of their story, it was great to just have eyes on where it all happened - to see (and hold) the hair samples, and to be able to get the story firsthand. Mrs. Hilsmeier related to me that she heard something with immense lung capacity howl from the direction of Muddy Creek in the summer of that same year. She said it was frightening, very loud, and sounded like the roar of "Mighty Joe Young." As there weren't many follow-up articles discussing the events at Hilsmeier farm, this was never reported.

Muddy Creek has a history of sightings and encounters. It was along Muddy Creek, just over the hill from the Hilsmeier farm, where Bob Chance had an encounter in 1972. Not far away, near Holtwood dam, a hunter had an encounter (also in 1978) where he was paced in the woods and then, after hearing shots fired, witnessed a 7-foot tall hairy biped running off in another direction. The BFRO notes several encounters in the Delta/Peach Bottom area throughout the 1970's.

These are just a few of the sightings I have gathered from the area. If you know of others in York County or South Central PA, please contact SEEKERS - we would love to hear about them. 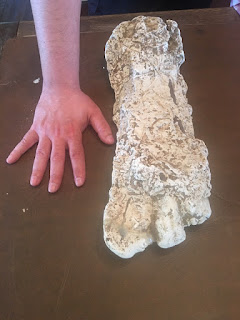 My hand next to a three-toed footprint cast like those found on Hilsmeier farm - though this cast comes from nearby Rocks State Park in Maryland.
Photo by Matt Jackson.
The cast comes from the collection of Bob Chance.