"Dogman" / upright canine sightings seem to be on the rise and Pennsylvania is one of the hotspots right now. I confess I'm not really a fan of the name "dogman" as it sounds like a bad supervillain, but it is becoming common currency, so it seems that will be the name researchers and general public alike settle on.

Most of the reports have these creatures looking like werewolves - hair covered, with a wolflike head on an upright body that looks like a hominid/wolf combination. Front arms with long hands ending in claws - which appear to be elongated paws turned into fingers or finger-like appendages. The back legs are often reported to have the bends, or hocks, as dog/wolf legs have. Werewolves are technically men that transform into wolves or wolf-man creatures, thus the term "dogman" is used - (unless someone can prove these creatures are shape-changers.)

Pennsylvania has a long history of werewolf legends - the dogman creatures may have been here when the Europeans arrived, but much of the werewolf lore and legends arrived with the Europeans (particularly the Germans). Indeed, there are so many werewolf legends in PA that we have a name for the GHOST of a werewolf - also used for the ghost of a wolf - the "spookwolf." Pennsylvania has stories of giant wolves, werewolves, werefoxes, weredogs, and more. PA even has a place named for supposed werewolves, Die Woolf Man's Grob: the story of which concerns both a werewolf and a spookwolf. But that's a story - and a song - for another day.

The PA Dogman / Upright Canine Sightings Map shows sightings throughout the state, including Central Pennsylvania. As I have collected other stories from some legend trippers / ghost hunters in South Central PA - they made references to "werewolves" and dog heads which appeared "too high in the trees" - which makes me wonder if these were actually dogman sightings as opposed to ghostly forms. If someone went to a location looking for ghosts and found something else strange - a cryptid like dogman for instance - perhaps they may assume it was an apparition as opposed to a physical creature?

If you have witnessed dogman or anything strange in South Central PA or MD please contact us at SEEKERS. 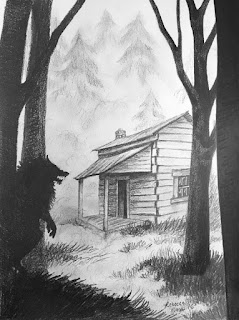