The Cryptid Creatures of South Central PA: part I, Trotterhead 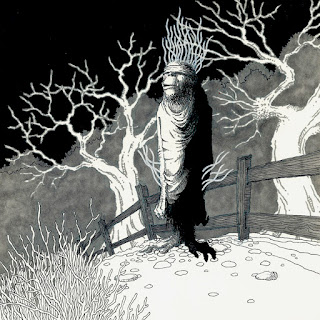 Trotterhead as imagined by the author - all rights reserved.

Much is often made of various Native American names for bigfoot - and this is a very valid pursuit. I believe we can learn a lot from the stories and descriptions of the First Nations people. They were here, after all, a long long time before Europeans came to the "New World."

However, folklore of all places has its various monsters- some of them are perhaps entirely mythical while others may be based on cryptid sightings. Some are likely a combination of both. In this series I will present some creatures of South Central Pennsylvania in a combination of history, folklore, and some speculative rumination.

The first of the series will be Trotterhead... which is spelled more often "Trotter Head" but as it is a word translated from German, albeit very roughly and having gone through a bit of folk process along the way, I prefer the compound "Trotterhead." I've also found reference to the creature being called "Old Trotter Head."

Often called "The Hex Book of the Pennsylvania Dutch," The Long Lost Friend is a collection of remedies, prayers, sympathetic magic, and spells - much of the book takes its folk magic from other books or pamphlets of the time, including Egyptian Secrets (which is attributed to Albertus Magnus, though it was not his work). Locally, the practice of the cures, remedies, and spells of the type found in The Long Lost Friend was called "trying" or "powwow." While The Long Lost Friend and the folk practice of powwow these days are frequently associated with the occult - and even sometimes used as a claim for some kind of hidden pagan tradition among the PA Germans - it is important to note that practitioners of powwow in Hohman's time - and even into the 20th century did not consider this any more controversial than prayer, nor anti-Christian in the least. The Long Lost Friend sat beside the bible, not in its place.

It was a passage in The Long Lost Friend where I first encountered Trotterhead:

This will certainly protect and free all persons and animals from witchcraft."

What sort of creature then is this Trotterhead? What kind of name is that? Some sources have that it was a fairly straight translation of a "meaningless" term from the German edition ("Trotter Kopf") - but this idea has always been problematic to my mind. There is nothing else "meaningless" or nonsensical in all of The Long Lost Friend. Aside from the fact it is a book dealing with folk magic, the approach of Hohman is actually quite plain and practical. There's not much whimsy in the book.

Still leaving us to wonder what exactly IS this Trotterhead? If we go to the similar charm in Egyptian Secrets, which predates The Long Lost Friend, we begin to get some clues. Here, Trotterhead is not mentioned but, instead, something called the "Bettzaierle." Bettzaierle is an Austrian term which translates to something like "bedgoblin." A bedgoblin is, fairly plainly, a reference to a nightmare - or an entity that brings nightmares.

But how did we get from Bettzaierle all the way to Trotterhead? Let's take a look... I'll stop here to say the German research was done for me by Moritz Maier (thank you Moritz!). Similar charms to the Trotterhead passage are found in other sources and spelled differently - some of these are regional dialects. Hohman's charm in German had the creature as "Trotter Kopf" - other charms have the creature named / spelled as Trottenkopf, Troudenkopf, Drudenkopf, etc.

These all seem to refer to beings which are responsible for bringing nightmares. Drudenkopf (Drude-head) is perhaps the clearest root, the drude being female entities with magical powers such as shapeshifting, creeping through cracks in houses*, and the like. So, the drude is essentially a form of a witch. With the suffix "-head" (kopf) on all of these we can assume the creatures were about getting into people's heads - bringing nightmares - the meaning is essentially the same as the "bedgoblin" even though the words are quite different.

Moritz pointed out to me that the "trot" in Trotterhead may have become part of the equation as well - as "trotten" is a German verb (to trot) - so the charm that may be intended to stop this creature not just from treading across ones property, and from trotting across (or through) ones head in the form of a nightmare - but also from "trotting" or stamping on ones chest... for the Nachtmahr (literally "nightmare") was another entity, almost certainly related to these others, which was known to sit on a sleeper's chest.

So, the Trotterhead brought nightmares to men, but how did it afflict livestock? I wonder, here if we have some connection to "witch knots" those braids and tangles found in horse's manes? ...

....and so: connecting Trotterhead to cryptids in an admittedly big leap...

*This "creeping through cracks" business reminds me very much of that scary critter from traditional folk ballads, Long Lankin - who "lived in the moss" and crept into the house through a crack in the glass.