The most famous legend associated with iron furnaces in Pennsylvania is that of the Ewige Jaeger or Eternal Hunter. While the Eternal Hunter has been tied to more than one Pennsylvania furnace, the tales most often have Cornwall Furnace as the center of the tale. Retelling ghost stories is not my interest, unless they are rare or add something to my other research, so I'll keep this short. Those who are interested can easily find the story in any number of ghost story books or online. Briefly, a cruel ironmaster drove his hunting hounds into the fires of the furnace. He was tormented by this for the rest of his life and, upon his death, he was cursed to roam the hills with his hounds in spectral form.

The cruel ironmaster is another common factor in these iron furnace ghost stories. Another "cruel ironmaster" was at the heart of a ghost story associated with Codorus Furnace in York County. Perhaps it took a cruel man to manage a forge. It was hard and dangerous work, after all. Or perhaps it's just easy to imagine that any forge worker had to be cold and hard, like the iron they produced? The ironmaster being the coldest of them all.

How would this explain cryptid sightings, which also seem to happen around furnaces?

Some have said that bigfoot creatures are simply curious about manmade structures and abandoned places are, well, abandoned. Free from regular human activity, these creatures could more easily satisfy their curiosity around these abandoned structures. Others have suggested they are getting dietary minerals left over from the iron manufacturing process that are present in the soil. Yes, eating dirt.

The albatwitch, those short hairy apple-eating bipeds of Pennsylvania, are said to make their home around the Chickies Rock area of Lancaster County. (I'll speak much more of albatwitch in a future article)... There was, at one time, seven iron furnaces located in what is now Chickies Rock park (there were eight total between Columbia and Marietta). The furnaces are in various states of decay now, but you can still find remnants and ruins of most of them. The wrench in the theories presented in the above paragraph is: the albatwitch legend predates the furnaces at Chickies Rock. The Susquehannock painted images of albatwitch on their war shields. Chickies Rock is also considered to be one of the most haunted places in the state of Pennsylvania. Many strange tales come out of that park - before and after the furnaces were there.

It seems iron furnaces were often placed in similar geographic areas. Codorus Furnace is along Codorus Creek while Chickies Rock is along the Susquehanna River, for instance. Perhaps this accounts for some of the phenomena. I'm guessing the geological features would also be quite similar (it would have been beneficial to have iron nearby, at the very least).

Iron itself was used to keep away the supernatural. Faeries and witches of legend were said to avoid iron. The iron horseshoe became a symbol of good luck. etc etc... So it seems especially strange that iron furnaces should become something like supernatural lightning rods.

I am very interested in any tales of cryptid activity around iron furnaces. If you know of any stories, please contact me. 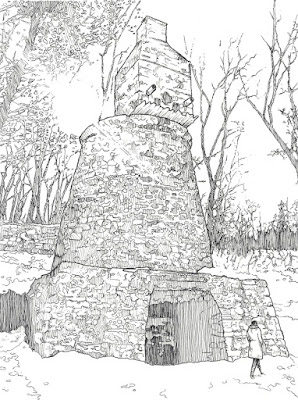