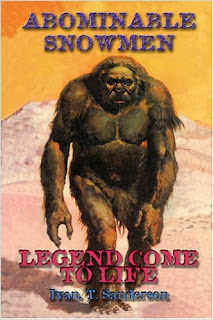 In terms of serious bigfoot research publications, this book has to be one of the oldest. Originally published over half a century ago, Abominable Snowmen suffers a little when looked at through the modern lens - but only a little. In all, it is a remarkable collection of ideas and theories on bigfoot creatures from a time long before the internet.

THAT is what becomes truly impressive as you read the book. It’s a rather thick volume (500+ pages) and it is packed full of information that Sanderson compiled without the help of the internet - but through extensive real-world paper page-turning (probably a good bit of microfilm scrolling too); through letters and conversations with witnesses, scientists, and other researchers; and through boots on the ground methods.

We now have it so much easier in many ways. Bigfoot in all its forms is still a mystery but because of the internet we can entertain hundreds of theories about the creatures - we can see pictures and video footage of suspected creatures - we can listen to podcast after podcast of witness sightings - all without leaving our homes. I can not imagine how much more difficult it must have been in the 1950s and 60s to get any information at all on these creatures. For this alone, Sanderson deserves a tip of all of our hats.

In the course of writing my own book, Beyond the Seventh Gate

, I interviewed a man who was 70 years old. He had done a lot of bigfoot research in the 1970s, but he had not followed the subject into the internet age. He was shocked about how much I knew - and the things I was able to tell him about the creatures. He said it took him years of research to find out about some of the things I told him. I quickly realized how much easier I have had it because of the internet.

Back to Sanderson. It is remarkable the information he did uncover - and the ideas he put forth in 1961 and before. The idea of there being more than one type of bigfoot creature in the United States seems to be something that more and more researchers are coming to terms with - but the acceptance of this idea has been very slow indeed. I understand the resistance - it’s hard enough to convince people there is one relict hominid / mystery ape in the woods. Suddenly you expect them to believe there are more than one?

Sanderson’s writing style can seem a bit ‘of the time’. This is mostly evidenced in a kind of stylized “voice” of the text which is actually quite charming to my mind. I picked up on Sanderson’s rhythms easily and began to quite enjoy the ‘words from another time’ feeling. It was almost like I was reading the journals of an old pith-helmeted explorer. The one aspect some readers may find troublesome though is Sanderson’s handling of different human races. He tends to paint with a broad brush and leans a bit on some stereotypes - well-meaning but stereotypes nonetheless. These aren’t hurtful necessarily - Sanderson is respectful throughout - but I think they are very much ‘of the time.’ It was a time Sanderson lived in - and was writing from - so I do not blame him at all. I only note it because to the modern reader it may be somewhat eyebrow-raising…. Though I suggest we do not hold it against Sanderson.

What I will hold against him is his attempt to coin a name for all types of bigfoot creature. He called them “ABSM” (short for Abominable Snowmen). He over-uses this acronym so much that it becomes very obvious he was hoping it would stick. With variants like “ABSMery” (boo) and the strange plural “ABSMs” used throughout the book, the term is much more of a distraction than a shorthand. I know he was writing before “bigfoot” “sasquatch” et al. became common currency, but "ABSM" just doesn’t work.

You will often see recommendations that this book should be on every serious bigfoot researcher’s shelf. I think in this day and age you could find more updated information in other volumes - but most of it just adds to what Sanderson has compiled rather than disproving or taking away from his ideas. If it’s not on your shelf you should at least read through it once … keeping in mind when it was written and the incredible task this must have been at the time.